I love you guys so much!  See you soon!

Question of the week:  What is one of the things you will most miss about Belgium-Netherlands/Europe after returning to the United States?

Answer:  I'm going to miss the people that I've met, my second family.   I'm also going to miss the cheese, natural sugar in food products, good public transportation, classic old architecture, a giant mix of cultures, vla, fun driving, busy overcrowded cities, speaking dutch, ahhhhhhhhh... yeah a lot of things.  But I am looking forward to a lot of things in America as well. My heart is being torn in two as we speak.  Good thing we live in a modern world and I'll get to come back some day. 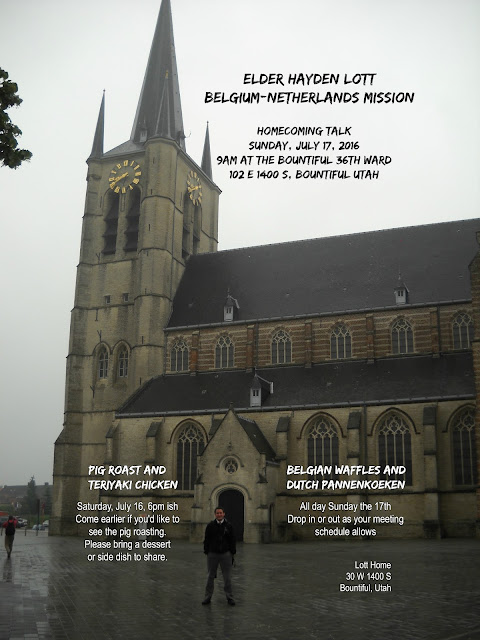 Posted by Anastasia at 1:36 PM No comments:

So this week was fantastic!  Mostly because I got to go back to Antwerpen for Mxx's baptism!  That was such a great moment!  She is such an amazing person, and there were miracles that followed her conversion.  I feel like she is one of the people I needed to meet/teach on my mission so it felt good to enjoy that moment with her and her family.

Other than that I'm just trying to finish strong.  It's going to be a good week.

I know that the Book of Mormon is true, it entices all men who read it to do good and to be good, to believe in Christ and to come closer to Him.  I know Joseph Smith is the prophet who the the Lord used to restore His church in this last dispensation.

I love you all!

Question of the Week:  Is there very much German influence in Eastern Belgium, or is it only Dutch and French?

Answer:  There is a pretty small German influence in Eastern Belgium, a little piece given to them from after the war, but it's not really anywhere in our mission so we don't ever have contact with it.  They stay pretty segregated as well so we don't run into very many Germans.  Well, except for the beaches during the summer.  I learned that last year serving in Brugge.  Pretty much the Belgium coast becomes little Germany during that time.
Posted by Anastasia at 10:02 AM No comments:

Hey everybody!  So this week was pretty good.  Got quite a few new investigators and had some experiences I'll never forget.

Here is a preview of what I sent in to the ward news letter:

As my time here in the mission field comes to a close I don't have all that much to say, mostly because until I have a moment for me and the Lord to sit down and talk about it I don't feel like I could give everything I've experienced and learned the right words.  There is a scripture that comes pretty close to summing everything up though.  Helaman 3:35 says:

Over the course of my mission I have seen that all those who yield their hearts to God are those who are blessed the most, and who are brought closest to the Lord.  They begin to act like him, faith and light fills their lives, and the difference can be felt and seen.  That goes for missionaries, members, investigators....  Everyone.  We are are children of a loving Heavenly Father.  He has a plan for us.  Jesus Christ is central to that plan.  Jesus Chirst is our savior and redeemer.  Our example and our friend.  I love them both and all they have done for us.

Love you guys so much!

Question of the Week:  Are Belgians crazy about their team in the UEFA tournament, or is it not a big deal?

Answer:  It is crazy right now with the European cup!  Belgium is doing really well and pretty much everywhere we go we see Belgian flags and decorations.  It is hard not to watch the games because they have all been at night and our apartment is really close to the Market square where they play all the games on a big screen.  But the Lord has been blessing us for our dedicating ourselves to the work, and it helps give me conversation starters to ask about the game :)

Posted by Anastasia at 11:51 PM No comments: 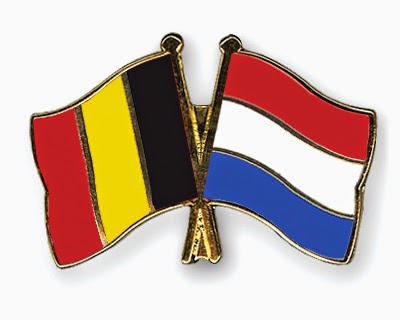 20 Thou art my servant; and I covenant with thee that thou shalt have eternal life; and thou shalt serve me and go forth in my name, and shalt gather together my sheep.

21 And he that will hear my voice shall be my sheep; and him shall ye receive into the church, and him will I also receive.

22 For behold, this is my church; whosoever is baptized shall be baptized unto repentance. And whomsoever ye receive shall believe in my name; and him will I freely forgive.